How to install Git

If you’re on Linux, or would rather learn how to use git from the command line (which is generally faster once you get used to it), then you should simply use Git. Here is a good link which gives the basic instructions for installing Git under Linux, OSX, and Windows.

How to use Git

The easiest way to make and host a backed-up accessible git repository is through Github. There (as a registered user, free account) you can create your own repositories which are hosted at http://github.com/${user name}/${repository name}. If you have are part of an organization (or create one), you can also create a repository under the organization which will be hosted at http://github.com/${organization name}/${repository name}. For this team, you should be a part of and use the VADL organization, so create any related repositories (that your team members will be using as well) in the VADL organization. Creating a repository is as easy as pressing the button that says New Repository and giving it a name. Generally you do want to click the box that says Initialize this repository with a README, since that will allow you to immediately start working on it.

Once you’ve created a repository (or if someone else already has, and you’ve been given access by them or through a shared organization), you can clone the repository onto your computer, which downloads the entire repository (and its history), compressed of course, into a folder of your choosing.

In Github Desktop, this is as simple as clicking in the upper left to clone a new repository and selecting one of the available repositories that it shows you (those are all the repositories to which you have write access).

To clone a repository (whether or not you have write access) in git console you have two options, shown here as examples:

When using the git@<url> syntax, it will use any configured ssh keys, otherwise it will ask you for login information.

If you were to clone a directory using the git@<url> syntax without any prior setup, you will probably encounter the following:

This is because git is trying to authenticate the session using something called ssh keys. These kes take the form of a private and public key pair. Github needs access to the public key.

The first step is to generate a key pair. Type the following into the terminal:

Accept the default key location and press enter twice when asked for a passphrase in order to leave it blank. It should look like the following:

Congratulations, you now have an ssh key pair residing in /home/<username>/.ssh titled id_rsa and id_rsa.pub.

The next step is to add the public key (id_rsa.pub) to your github profile. Navigate to your profile on github.com and click on edit profile. Next, select SSH and GPG keys from the left-hand menu. Click New SSH Key on the top right of the screen, and give it a name (the name doesn’t matter). Next, go back to the terminal and enter the following command:

Copy everything from ssh-rsa to the end of the random string (exlcuding any user@host at the end!). Paste this into the Key window in the github profile and you should have something similar to the following image. 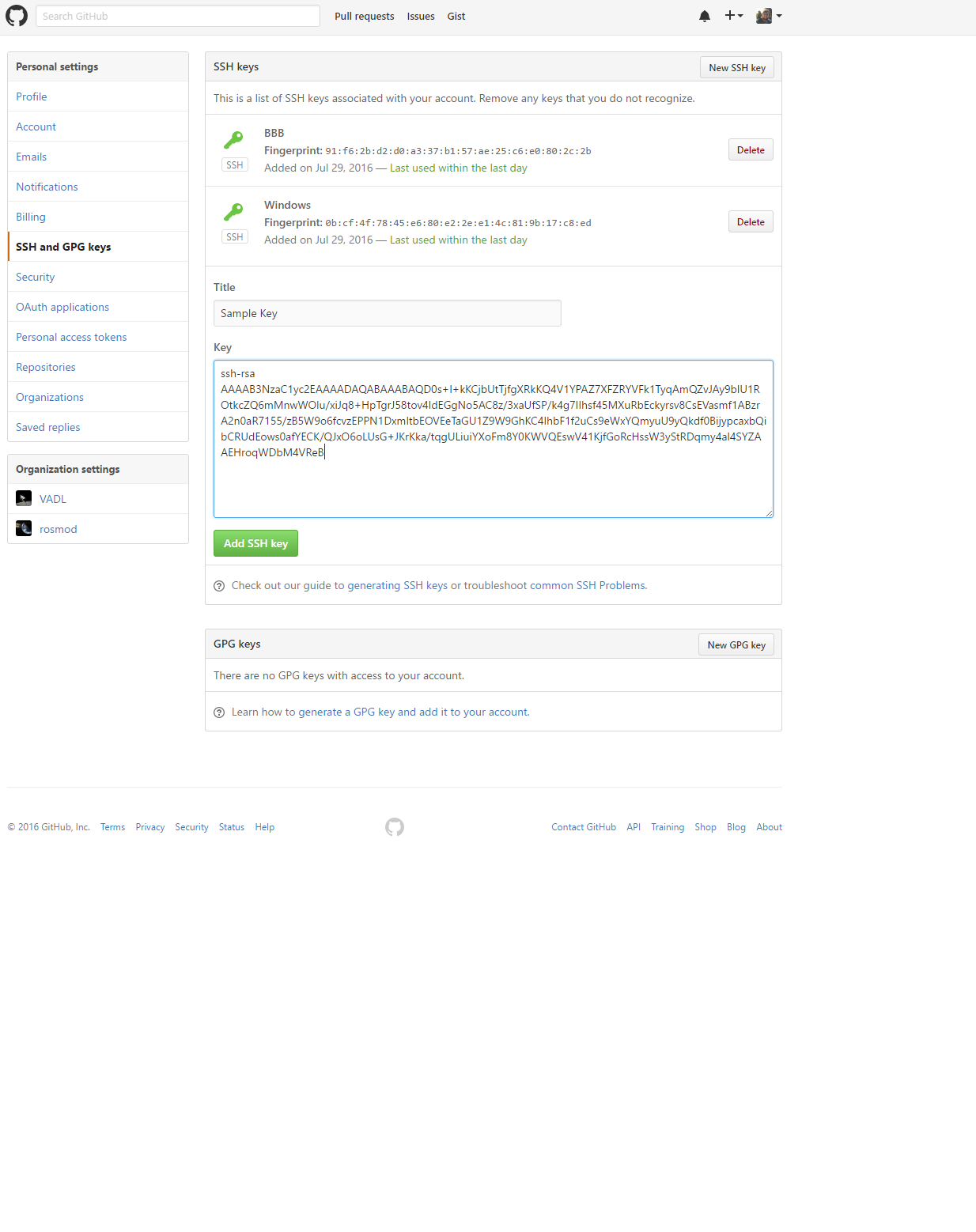 Now, cloning (and pushing/pulling) a repository will be sucessful! There is one more thing we can do though to make the process more streamlined in the future.

We are going to set up a global username and email for git to use when pushing to github. This will prevent you have having to type in the information every time. Simply type the following into a terminal:

That’s it, you done!

Once you’ve cloned the repository, you can add files and edit existing files as you want, without having to use any interface or anything. Simply do your work as you normally do.

Every so often (generally when you’ve fininshed editing a file, or reached a stopping point you should commit your work so that it becomes part of the history of the repository. You generally want incremental changes as opposed to doing a lot of work and committing everything at once. The reason for this is in case you need to roll back (revert) some of the edits or in case you run into a merge conflict (e.g. if you and someone else touched the same file at the same time).

When you’re ready to commit you need to do three things:

Or in Github Desktop you simply sync.

If you’re on Github Desktop, simply switch to the changes tab and select the files you want to add.

Or if you’re on Github Desktop, just write the message in the text box when you add the files.

Pushing your work to the cloud

After you’ve edited files, pulled updates, add committed your changes you need to push those changes to the cloud.

or press the sync button in Github Desktop.

Pulling others’ work from the cloud

As stated above, pulling every so often to update your local copy of the repository is paramount to ensuring consistency.